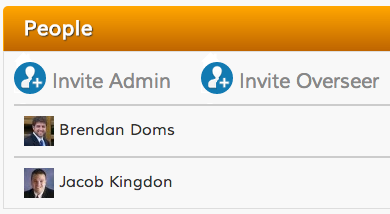 User types have always been what separates VeriSky from other services. We want to provide organizations with privacy and flexibility, while also giving them a platform for collaboration. When VeriSky first launched over a year ago, we did so with four user types: Admin, Overseer, Manager, and Student Leader. Over the past year, through user feedback and hard data, we have come to realize that some changes needed to be made to the Overseer user type.

The original intention of the overseer user type was to give board members, executive staff, and high level committee members access to all of the organization's data, without the ability to create, edit, or delete anything within the system. We imagined board members logging in to see the progress made by those chapters serving disciplinary sanctions or the progress that colonies were making toward becoming a chapter. For one reason or another, this user type accounts for less than 2% of the total users in VeriSky. Of that 2%, we found that Overseers have spent the least amount of time on the site and many have only logged in once.

Since the Overseer was being completely underutilized, we decided to ask our customers what they thought. We found that there was an emerging need for a new user type, so we gave the old Overseer a new role and a bit more power. With the emergence of several new dashboard types available to our customers, they are now managing up to five dashboards at one time. The new overseer fills the role of a product manager. We have given them the ability to create, edit, and delete items (similar to the admin), but we have restricted them only to the dashboard(s) where they have been assigned. We have also restricted the Overseer's access to admin options and settings, as well as their ability to invite other admins and overseers to the system. An Admin now has the ability to assign a Director of Expansion as an Overseer on the Expansion Dashboard and a Director of Accountability as the Overseer on the Discipline Dashboard. They both have complete control over their respective dashboards, but cannot make any changes or edits to the other dashboards that the organization is using. This extra level of management allows the organization to assign fewer administrators and delegate Overseers to manage each individual dashboard.

Great! Now what should I do?

If your organization has previously assigned an Overseer, we recognize that this change affects you. We suggest taking one of the following actions as soon as possible:

You may also find that your organization has several admins on the account that would be better suited as an Overseer on one or multiple dashboards. To do this, go to the people section and click on the edit button by the individual's name. A box will pop up that will allow you to change their role from Admin to Overseer. They will be removed as an admin on all other dashboards and will just have access to the dashboard where you have assigned them. If you would like them to be an Overseer on multiple dashboards, you may add them by clicking "Invite Overseer" on any dashboard and entering their email address.